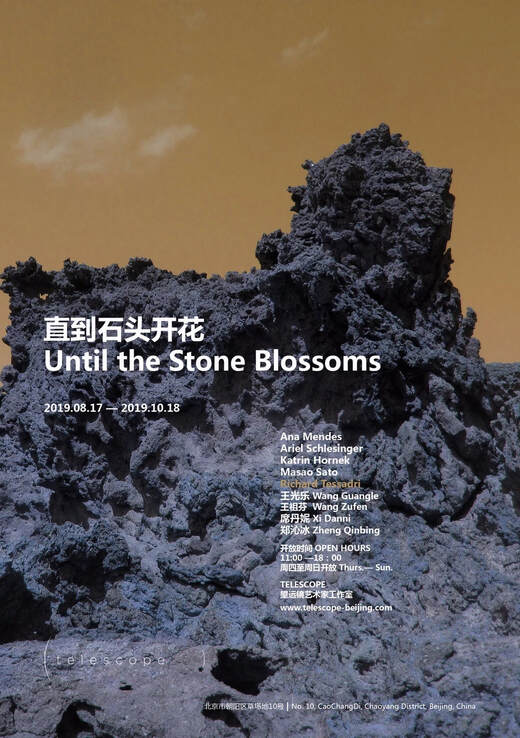 In this exhibition, Zhang brings together selections from artist's “collections” to indirectly form an exhibition of artists manners and ways of seeing through what and how they acquire. The “collection” here is not so much about the identity of the objects themselves as it is the connections they have with each other. Zhang, who is also an artist, chose to create an exhibition by focusing on the connection between objects and the structural interplay that is created between them. Searching means a path taken. The exhibition did not originate in the mind first, but in the body as it walked along that path. The objects that appear in the exhibition do not simply refer to their creators or to the owners. They are freed from those associations through a natural process of developing and becoming, as photographic film is developed and becomes something else in a darkroom. Most of these things are common or humble objects and would never be considered to be art: a pair of rubber boots, a mosquito net, some stones, a phone book... but in all actuality they are much more than that.
王光乐珍藏的那只胶鞋是一次经过路边卖胶人的地摊获得的。它上面贴满了橡胶补丁，因为卖胶人想通过这只鞋来向路人显示他卖的胶好。这只鞋并不一定展示胶的性能好，因为很多胶都能做出那样一只鞋，但这只鞋能让人清晰地看见卖胶人的劳动：每一块补丁都经过合适的修剪和打磨，让它们和胶鞋粘的严丝合缝。他从容地等待一块块晾干，直到这只胶鞋几近被贴满。

Wang Guangle's rubber boots were collected at a roadside glue vendor's stall. He had rubber boots covered with rubber patches to show passers-by that the glue he sells is good quality. But this glue does not necessarily exhibit superior performance because many other glues also can make or repair such a boot, but with this boot one can clearly see the glue seller's work: each patch is properly trimmed and polished to make them fit seamlessly onto the boots. After he applies the patches he waits patiently for the pieces to dry until the boot is nearly full.

Xi Danni's grandfather, who did not have enough cloth ration tickets to buy mosquito nets during the lean years of the 1960’s, built a mosquito net out of the face mask gauze he had more easily accumulated. The mosquito net has long disappeared, but according to her mother's memory, Xi Danni restored the mosquito net.

Ana Mendes videotaped an illiterate old lady tell her story. Because of her disability the elderly woman used drawing to remember the phone numbers of friends and colleagues. The picture on her phone book in the exhibition is a group of codes, which she used to build a bridge over her separation from the world.

Richard Tessadri, a geologist and researcher at Innsbruck University, has collected a large number of human kidney and gall stones over the past 30 years. These stones are usually sent for analysis and auxiliary diagnosis. In 2015 artist Katrin Hornek collected body stones posted by people on the Internet. Coincidentally, she discovered the stone study work of Tessadri. After his unexpected death Katrin took stones from the Tessadri collection to the Tishhofer cave in the Alps for an art project.

Masao Sato, a Japanese carpenter, built a temple that was destroyed in a storm more than 20 years ago. His mentor told him that one day a friend would take the temple away. In 2016, Ariel Schlesinger  acquired the temple, and rebuilt the residual parts in Germany, with a large tree inside.

Zheng Qinbing, a teacher, has collected round stones for many years and keeps them in flowerpots. He recalls his dream of boulders when he was a child and dreams that they blossom one day.

All these things, large and small, show the pursuit of efficiency, goals, and functions, and flow into the rupture between the natural and the rational ways of value identification. Like the elements that cannot be absorbed by the body’s system in a simple but natural way, sedimentary structures become stones different from body organs and their structures. This simple and natural way of depositing ‘structure’ is like the accumulation of simple labor seen through these objects. There is no need to question the authenticity of labor. Its surface is as you can see: From a rubber shoe to a rubber-patched shoe, it's not just the ordinary one-plus-one, but a path to reach the destination; from the gauze face mask to the mosquito net, conjecture secretly transfers the harshness of reality, allowing the mask to be transformed from a muddy breath into a spliced mosquito net; without ‘language assist’, the information pointing to specific characters in the telephone book is replaced by abstract lines and becomes the writing of consciousness; the analysis and collection of body stones are is the geological exploration and respect for live bodies; the gift of the temple to the world is expected to regain its life in another journey, just like waiting for the stones to blossom. 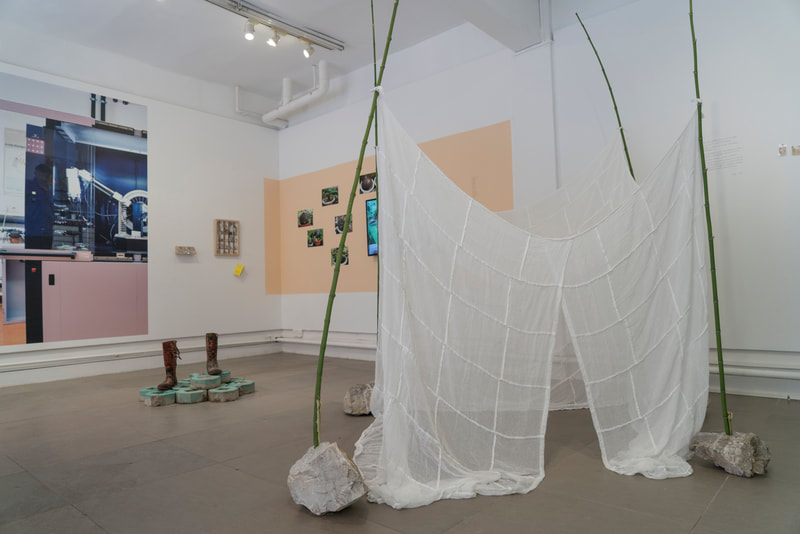 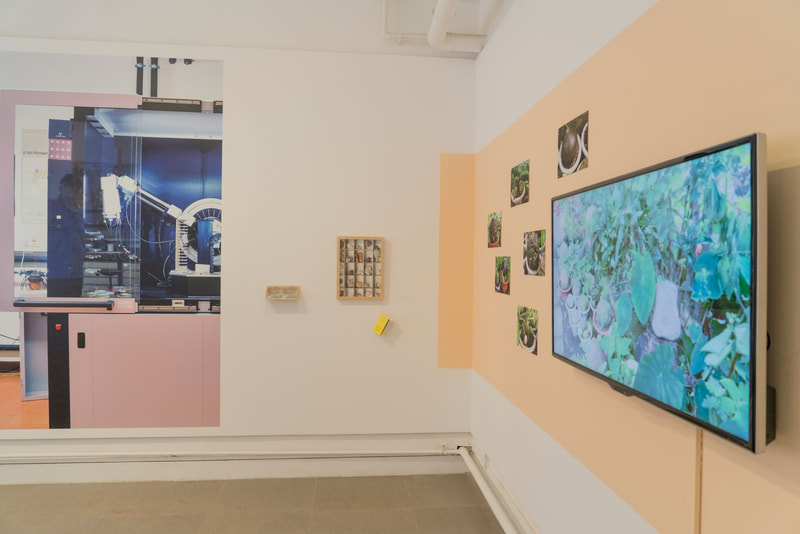 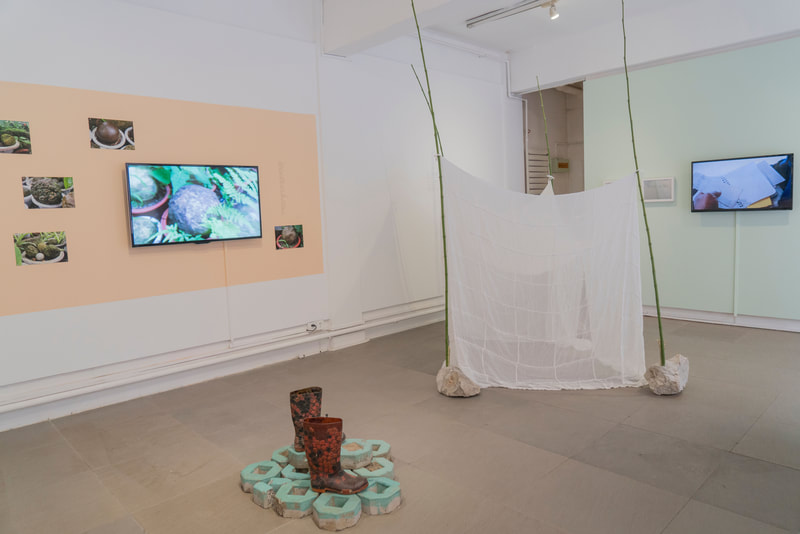 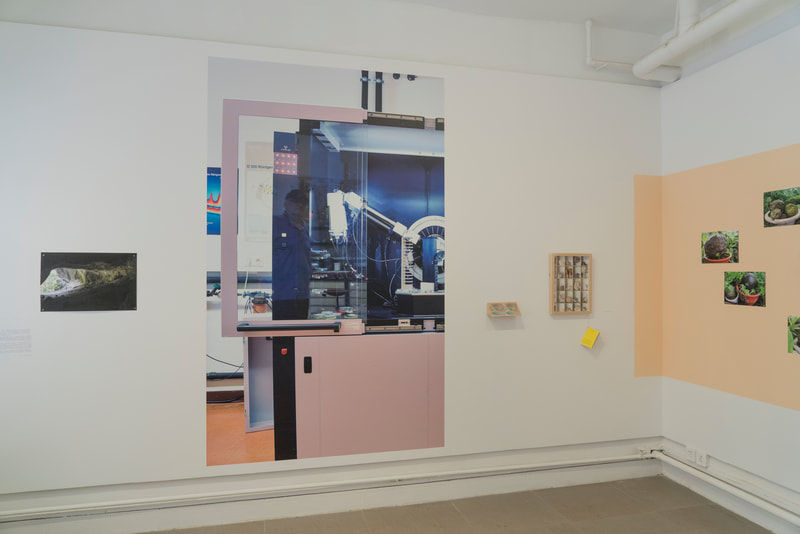 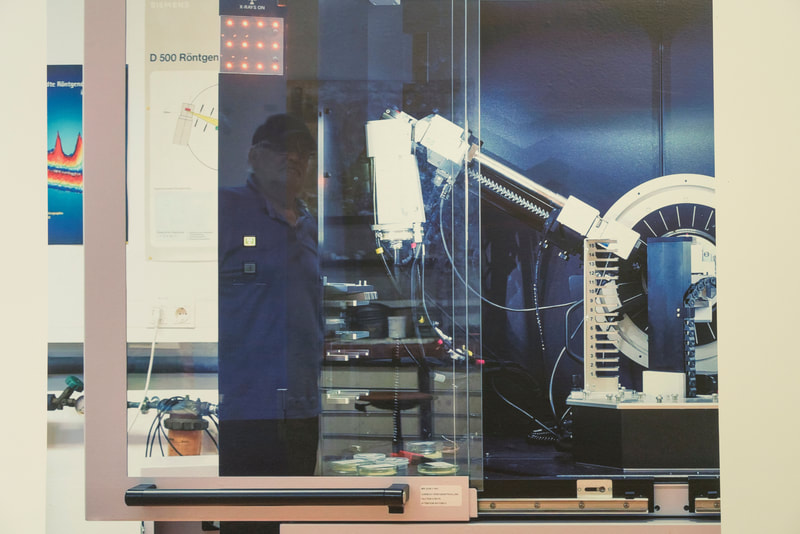 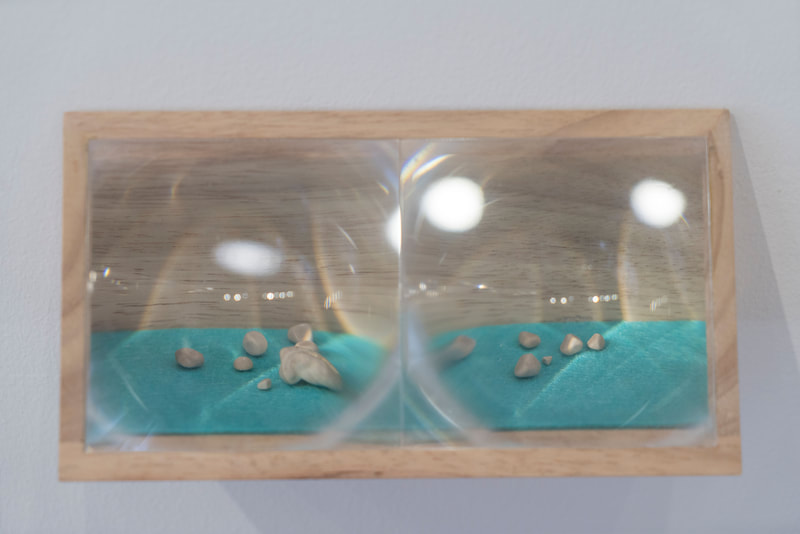 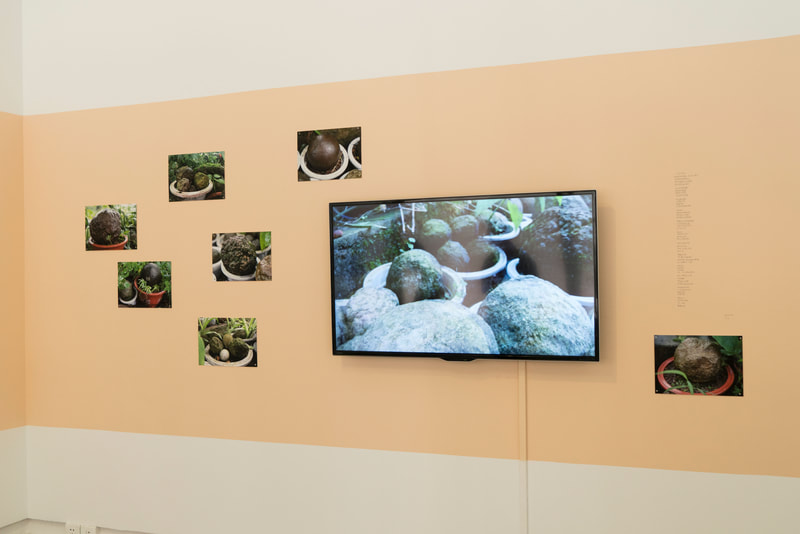 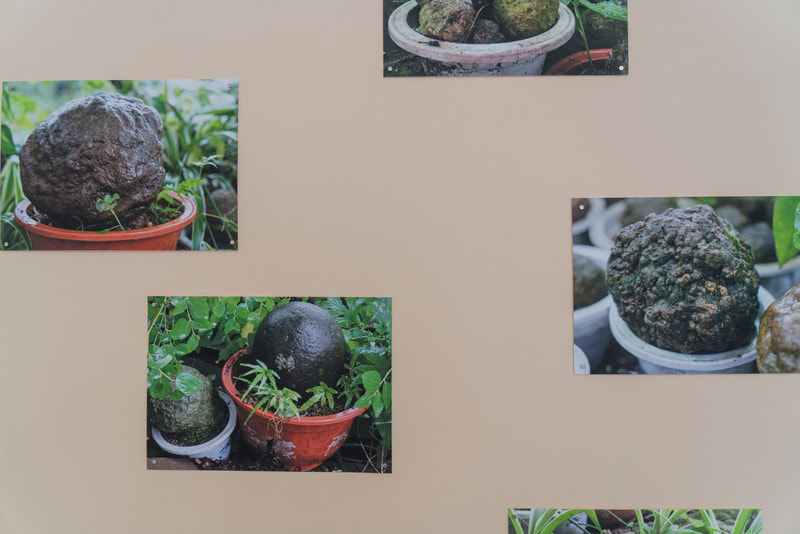 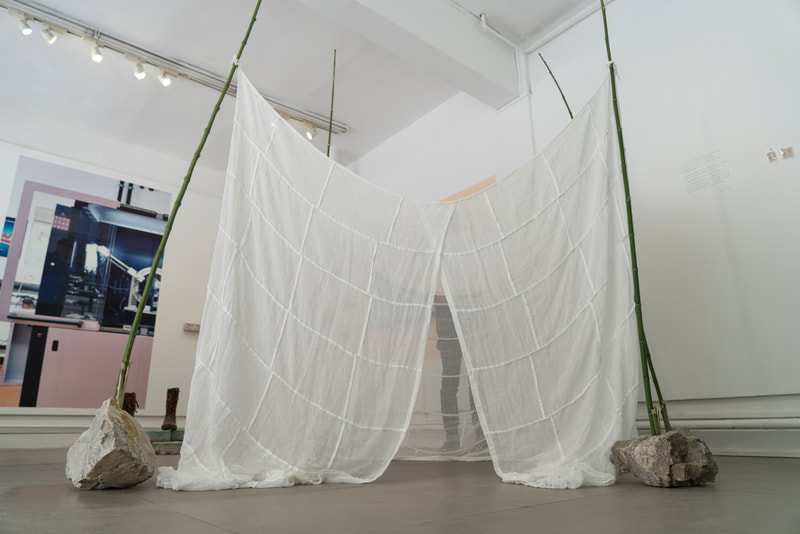 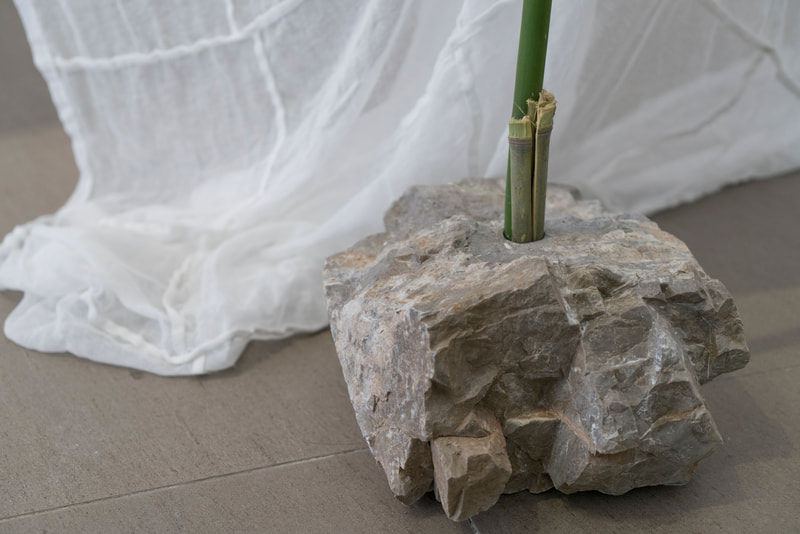 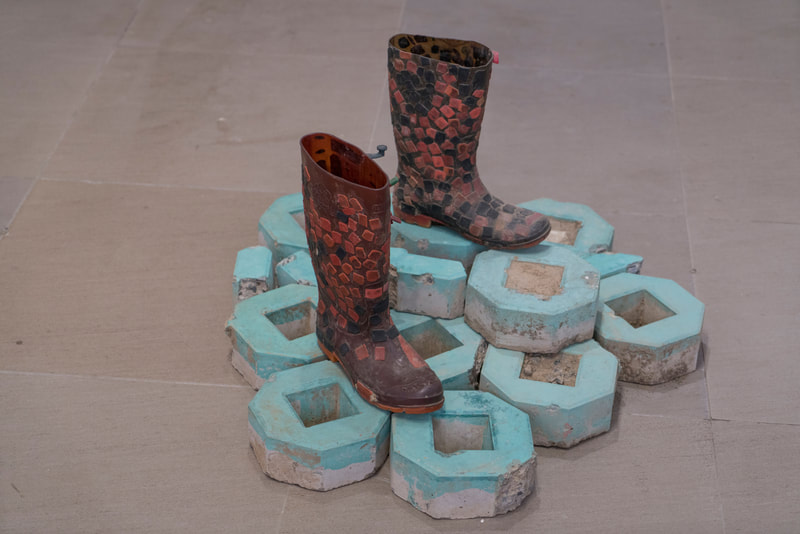 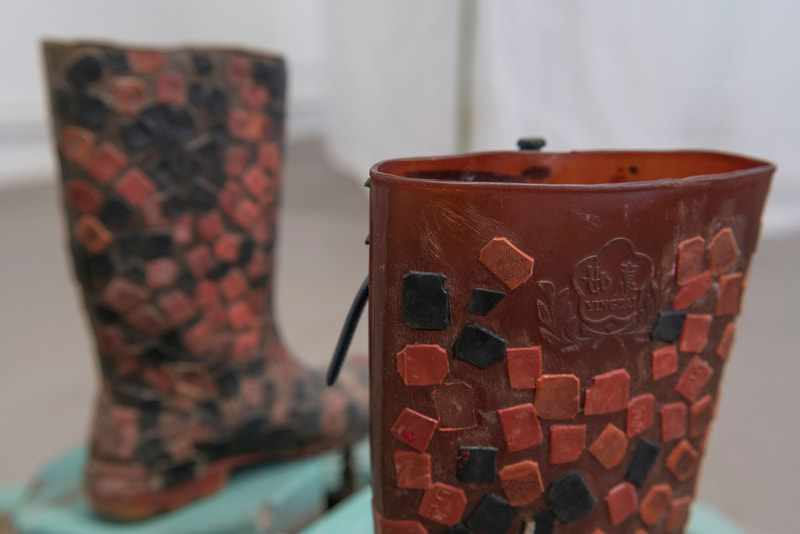 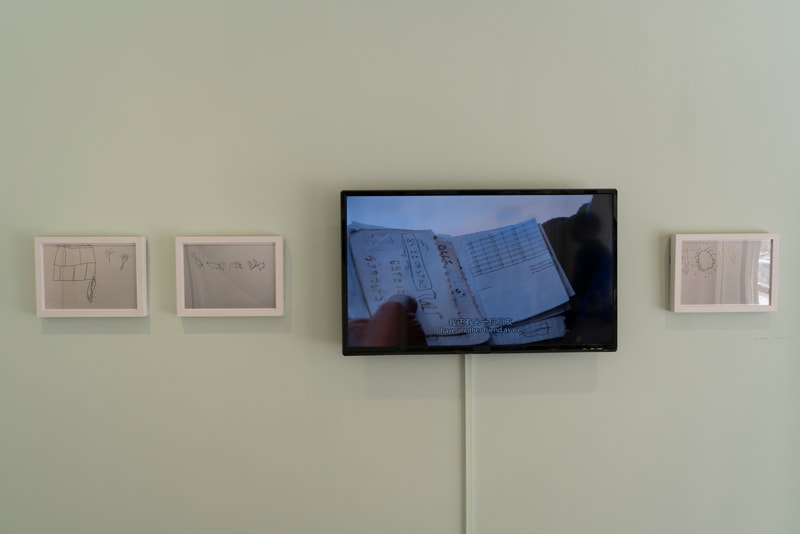 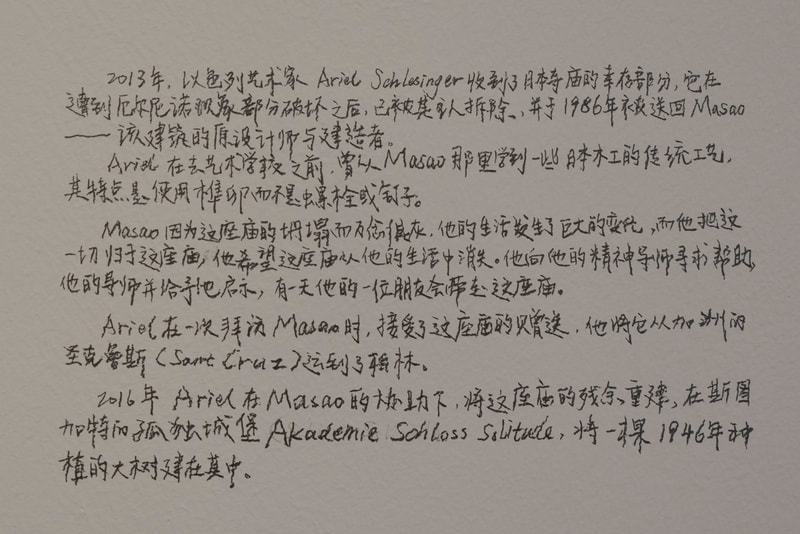 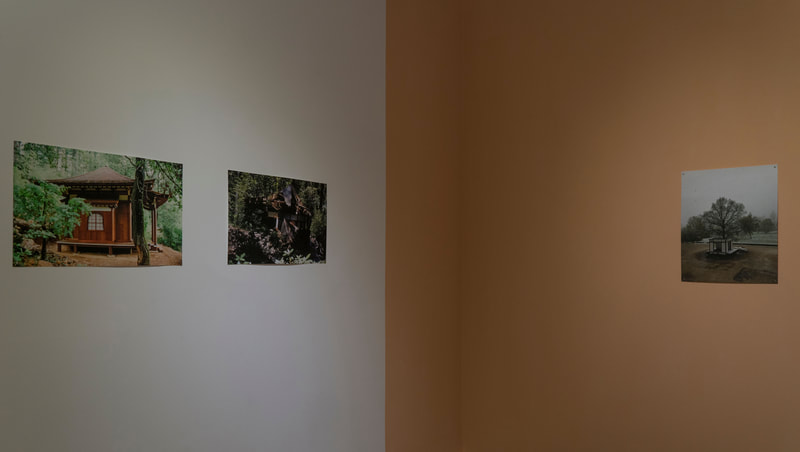 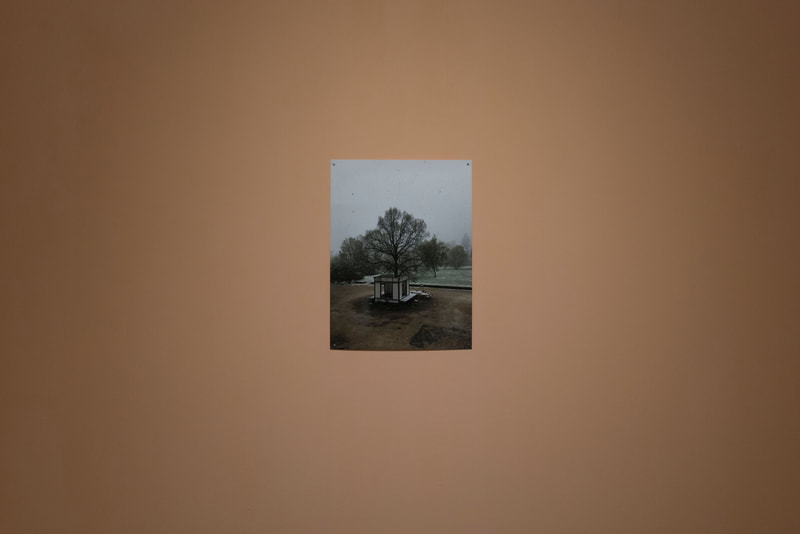